Subscribe to our newsletter to recieve our latest Discounts, news & offers for PS5, PS4, used PS4 and Xbox One games and accessories.

New Price for the PS5 console!

An unashamedly mature title in a sea of family-friendly offerings on Kinect for the first time, Rise of Nightmares takes you into a cinematic world of horrific blood and violence.

Rise of Nightmares is a single player Survival-Horror game exclusive to Xbox 360 that brings truly mature gameplay to the console's Kinect Sensor* accessory for the first time. Utilizing the Kinect Sensor's unique motion capture technology, the game allows for completely controller-free gameplay in a spine-tingling game environment filled with fearful anticipation, terror and of course, zombies. Additional features of the game include: a gripping storyline, dozens of melee and bladed weapons. 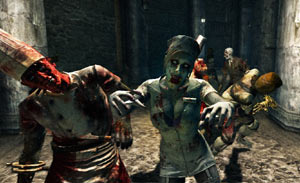 The Survival-Horror genre truly comes to the Kinect Sensor. 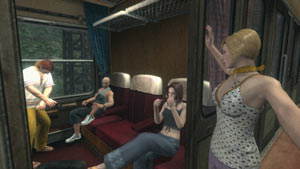 Survive a nightmare that engulfs an unsuspecting couple.

Rise of Nightmares is a true first - an unabashedly mature experience for Xbox 360 using the Kinect Sensor. Players take on the role of the well-meaning, but flawed hero, Josh. Intent on saving his faltering marriage to wife Kate, he sets off on what is intended as a romantic rail trip through Eastern Europe only see her kidnapped by a grotesque henchman. Not exactly the happy ending that was intended, he pursues but finds himself at the mercy of his target, a mad and morbidly creative scientist named Viktor, who is backed by various minions, including an army of zombie-like creations. Your goal is to survive one hellish night as you fight hand-to-hand against your enemies using the hands-free controls of Microsoft Kinect and attempt to find and free Kate.

To survive Josh's nightmare you will need to utilize the Kinect Sensor to explore the game environments and discover the weapons needed to combat enemies. The game features dozens of diverse weapons of both the melee and slashing variety. These include everything from the standard fare of knives, axes, chainsaws and your bare hands and feet, to more gory contraptions that will rip your foes limb from limb if wielded correctly. Movement throughout the game is controllerless via the motion control capacity of the Kinect sensor, which recreates your every move whether that be running, backpedaling, side steps, balancing moves, jumps and more. The Kinect Sensor also allows for precision attacks, including punches, kicks, and blocks, as well as hacks and slashes with weapons that are also picked up using the Kinect Sensor. Adding to your horrific challenge, certain enemies may require attacks using specific weapons or combinations of weapons, and weapons are also degradable - meaning that they have a limited shelf life and must be used wisely.

The Kinect sensor allows you can experience gaming like never before. Easy to use and fun for everyone, the Kinect sensor utilizes revolutionary full-body tracking to put you in the center of the fun. This amazing new technology allows the sensor to recognize your body and mirror your movements in the game, making you the controller. The sensor is compatible with every Xbox 360, features a color VGA motion camera (640x480 pixel resolution @30FPS), a depth camera (640x480 pixel resolution @30FPS) and an array of 4 microphones supporting single speaker voice recognition.

We have a 30-day return policy, which means you have 30 days after receiving your item to request a return.

To be eligible for a return, your item must be in the same condition that you received it, unworn or unused, with tags, and in its original packaging. You’ll also need the receipt or proof of purchase.

To start a return, you can contact us at wecare@shamystores.com. If your return is accepted, we’ll send you a return shipping label, as well as instructions on how and where to send your package. Items sent back to us without first requesting a return will not be accepted.

You can always contact us for any return question at wecare@shamystores.com.


Damages and issues
Please inspect your order upon reception and contact us immediately if the item is defective, damaged or if you receive the wrong item, so that we can evaluate the issue and make it right.


Exceptions / non-returnable items
Certain types of items cannot be returned, like perishable goods (such as food, flowers, or plants), custom products (such as special orders or personalized items), and personal care goods (such as beauty products). We also do not accept returns for hazardous materials, flammable liquids, or gases. Please get in touch if you have questions or concerns about your specific item.


Exchanges
The fastest way to ensure you get what you want is to return the item you have, and once the return is accepted, make a separate purchase for the new item.


Refunds
We will notify you once we’ve received and inspected your return, and let you know if the refund was approved or not. If approved, you’ll be automatically refunded on your original payment method. Please remember it can take some time for your bank or credit card company to process and post the refund too.

Delivery all over Egypt

Pick whatever you want and it will be dilevered to you

We apply a top security measures to protect your data.

Support team will help you whatever you're strugling with.

Just press the Chat with us button and we will help